The Club is for the benefit of its members. It will not be classed as a trading business, so all the profits from any source, function and/or activities of the Club shall be maintained for the benefit and for the future education of its members in the management, training, showing, breeding and every aspect pertaining to canines.

Payment of an annual subscription confers membership and entitles a member to elect Officers and Committee members and vote on such matters as may arise in the running of the Club. The Committee reserves the right to refuse membership. The liability of membership shall be limited to each member’s annual subscription. The names and addresses of members shall be recorded by the Secretary or Treasurer in a document to be known as – “The Register of the Irish Red & White Setter Club of Great Britain‘“, a copy of which shall be available for inspection by members of the Club or by the Kennel Club if so requested. It is the responsibility of all members to ensure that any change to name and address details, including e-mail address changes, are advised to the Secretary or Treasurer. The number of members is unlimited.

The financial year shall commence on 1st January and end on 31st December. Annual subscriptions shall be payable on 1st January each year. The subscriptions of members admitted after 1st December shall cover a period up to the end of the following year. The annual subscription shall be changed when deemed necessary at an Annual General Meeting, this coming into force on 1st January the following year. Non-payment of subscription and/or outstanding arrears by the 31st March will result in the name being erased from The Register. No Member shall be permitted to vote or compete for any prize offered by the Club or in any way enjoy the privileges of membership, until his/her current subscription and/or outstanding arrears due to the club have been paid. Voting rights will be granted only to fully paid up members as at the 31st December of the previous year. Joint membership entitles each full member to one vote. Junior members have no voting rights. Junior members upon reaching their sixteenth birthday will attain full voting rights.

Members of the Irish Red & White Setter Club of Great Britain who live in the country of origin of the breed, i.e. Ireland, should pay the same annual subscription as those members residing in Great Britain.

All offices shall be honorary.

A President may be elected at the Annual General Meeting in appreciation of their services to the Club/Breed, on the recommendation of the General Committee, to be decided upon by a simple majority vote of members attending the Annual General Meeting and shall remain in office for a period of three years but shall be eligible for re-election on the recommendation of the General Committee.

The General Committee shall elect each year from their own number a Vice-Chairman who shall serve for one year only.

Sub-Committees shall consist of a minimum of three persons, save in exceptional circumstances, the maximum number to be determined in accordance with the needs of each individual Sub-Committee. All Sub-Committees to be dissolved and reformed at the AGM, this to apply in all cases unless otherwise specified by the Kennel Club. Sub-Committees shall be responsible for promoting the purpose for which they were formed and shall organise such events as may be consistent with this aim and the best interests of the breed. Each Sub-Committee shall hold a minimum of one meeting each year, presenting an Annual Report at the AGM. No expense in excess of funds shall be incurred by the General Committee. The General Committee shall have the power to co-opt members onto Sub-Committees between AGMs to fill any vacancies that may arise during the year.

The Judges Sub-Committee while acting in accordance with Kennel Club Policy is nevertheless a sub-committee of the Club and in that regard remains responsible to the General Committee for the conduct of its matters.

The election of members to serve as Officers and General Committee members shall be by postal ballot prior to the Annual General Meeting. Ballot papers containing the names of candidates, proposed and seconded by members, will be posted to all paid up members as at 31st December by an appointed Auditor. Completed ballot papers MUST be returned to the appointed Auditor not later than 14 days before the Annual General Meeting. Late or spoiled ballot papers will be declared null and void. Should there be the same or less nominations for the number of vacancies there will be no need for a ballot unless there is a need to determine the length of office to be served.

Any member who shall be disqualified under the Kennel Club Rule A11.j.(5) and/or Kennel Club Rule A11.j.(9) shall ipso facto cease to be a member of the Club. If the conduct of any member shall, in the opinion of the General Committee be injurious or likely to be injurious to the character or interests of the Club, the General Committee may, at a meeting, the notice convening which includes as an object, the consideration of the conduct of the member, determine that a Special General Meeting of the Club shall be called for the purpose of passing a resolution to expel him/her. Notice of the Special General Meeting shall be sent to the accused member, giving particulars of the complaint and advising the place, date and hour of the meeting that he/she may attend and offer an explanation. If at the meeting a resolution to expel is passed by a two-thirds majority of the members present and voting, his/her name shall forthwith be erased from The Register of the Irish Red & White Setter Club of Great Britain and he/she shall thereupon cease for all purposes to be a member of the Club, except that he/she may, within two calendar months from the date of such meeting appeal to the Kennel Club upon and subject to such conditions as the Kennel Club may impose.

If the Club expels any member for discreditable conduct in connection with dogs, dog shows, trials or competitions, the Club must report the matter in writing to the Kennel Club within seven days and supply any particulars required.

The Annual General Meeting shall be held as and when convenient but not later than 30th June for the following purposes:

Items for inclusion on the Agenda must be in the hands of the Secretary at least 42 days prior to the meeting.

The rules of the Club may not be altered except at an Annual General Meeting and such alteration shall not be brought into force until the Kennel Club has been advised and given its approval.

A bank account shall be held in the name of the Club, to be operated upon by the Chairman, Secretary and Treasurer, with the signatures of any two of the preceding required when a withdrawal is made. The account shall be kept by the Treasurer. The accounts will be certified annually and presented to the members at the Annual General Meeting. NOTE: Certification of accounts must be carried out by one qualified accountant or two unqualified individuals with accountancy experience. Those undertaking the certification must be independent from those who prepared the accounts.

In presenting the accounts, a copy of the annual statement of accounts for the last financial year will be sent to all members prior to the AGM.

A designated Fund shall be maintained for the sole use of the Rescue Sub-Committee to cover reasonable expenditure incurred in the rehoming of Irish Red and White Setters. No expenditure in excess of £500.00 may be incurred by the Rescue Secretary without the prior agreement of any two officers of the Club, who will operate the fund on behalf of the Club. In the event of the Club ceasing to exist any rescue funds remaining should be offered to another Kennel Club recognised Irish Red and White Setter Cub within Great Britain to be used solely for rescue purposes. Failing this, any remaining rescue funds should be disposed of under Rules, Club Property.

The Club shall not join any Federation of Societies or Clubs.

At least once a year communication should be sought between representatives of the Club and any other body representing the Breed in this or any other country.

The Kennel Club is the final authority for interpreting the Rules and Regulations of the Club and in all cases relative to Canine or Club matters.

No person whilst an undischarged bankrupt, may serve on the Committee, nor hold any other office or appointment within a registered Kennel Club Society. 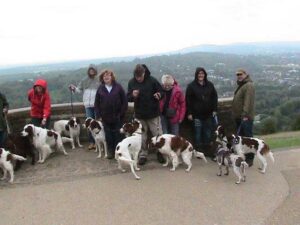