Since the introduction of Irish Red and White Setters into the UK in 1979 (after the revival of the breed from very few founders in Ireland) the Breed Health and Genetic Sub-Committee has closely monitored breed health from 1980.

A database is kept with the breeding and health details of every UK registered IRWS from 1980 and also some overseas IRWS.  The information is already in the public domain, but there is an important facility for individual owners or breeders to report health matters affecting their own dogs – these reports are strictly confidential and, should research into the condition be required, dogs are only referred to by case number, not by name.We depend on and are grateful for the support of owners in monitoring breed health.  By reporting any medical problems to be recorded in the database, the Club is able to have a general picture of breed health and, should any issue arise, be able to deal with it.

Learn More On the Health Issues of IRWS 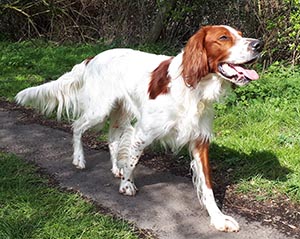 Find out the lineage of your Irish Red and White Setter

The Breed Health & Genetic Sub Committee have put together the breed history – you can trace your line back to its beginnings.  Thanks to them for all their hard work.  There are two parts to it: one and two.

The Effective Population Size (EPS) is published by the KC and gives an evaluation of the size of a breed’s gene pool and its potential diversity.  Inbreeding diminishes a breed’s genepool and diversity, so the higher the EPS the better – below 100 is not good and is cause for concern.

As the Revival of the breed in the 1970s was based on less than 10 individuals these figures are not surprising, but with careful selection of breeding partners, avoiding Popular Sires and using acceptable individuals from the overseas IRWS sub-groups our EPS, should rise steadily.”

What does an asterisk mean after a dog’s name?

The Kennel Club Breed Records Supplement that records all dogs registered states that ‘Where asterisks are shown after the registered name, this identifies a dog of either impure or unverified origins.’

As an example, DAN OF DERBY *** indicates that Dan is a first generation crossbreed.